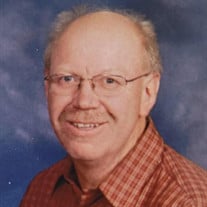 Roger Niemuth, 60, passed away on Sunday, August 29, 2021, surrounded by his family. He was born in Waupaca on October 26, 1960, a son of Robert L and Dorothy (Bitterberg) Niemuth. Roger worked at Niemuth's Steak and Chop Shop his entire life starting with salting pork bellies with his siblings at the tender age of 8. Roger and his brother Bobbie became partners/owners in the business in 1996 and spent the first few years of that partnership trying to convince their father that he (Grandpa Bob) didn't need to be at the store every day. In his spare time, Roger enjoyed bowling, horseshoes, hunting and skiing trips with his buddies, and spending time with his buddies and nephews. Roger always had a smile on his face and a heart of gold. He helped many people suffering from addictions, took some of them into his own home and helped them turn their lives around. He was considered a brother and family to many of these guys. He is survived by brother Richard (Louise) Niemuth, Appleton. Sisters Nancy (Mark Ervin) Columbus OH and Janet Niemuth, Tomahawk, WI. Sister-in-law Holly Niemuth, Waupaca. Nieces and nephews Aaron (Becki) Niemuth and their children Carter and Kenzie Waupaca, AJ (Jim) Taylor, and their children Owen and Sylvi, Amherst, Scott (Bridget) Niemuth, Waupaca, Katherine Ervin, FL, Elizabeth Ervin, MI and Cameron and Kylie Niemuth, Waupaca and many friends and employees who considered him a brother and family. He was preceded in death by his parents, Bob and Dorothy Niemuth and his younger brother Robert E Niemuth (Bobbie). A Celebration of Life for Roger will be held at South Park - Upper Shelterhouse in Waupaca on Sunday, September 12th, 2021 from 1 PM until 4 PM. In lieu of flowers, memorial contributions can be sent to - Richard Niemuth - N1337 State Road 22, Waupaca, WI 54981. The Holly Funeral Home of Waupaca is assisting the family with arrangements.

Roger Niemuth, 60, passed away on Sunday, August 29, 2021, surrounded by his family. He was born in Waupaca on October 26, 1960, a son of Robert L and Dorothy (Bitterberg) Niemuth. Roger worked at Niemuth's Steak and Chop Shop his entire... View Obituary & Service Information

The family of Roger L. Niemuth created this Life Tributes page to make it easy to share your memories.

Send flowers to the Niemuth family.