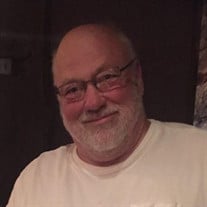 Roly (Roland) Marotz also known as Dad, Grandpa, Strawberry Grandpa, Big Roly, and our personal favorite – “the guy eating potato salad out of the bowl over there” was born July 4th, 1945 in Mattoon, Wisconsin. Roly passed away Wednesday September 16th, 2020 at the age of 75. He was the son of Arthur and Viola Marotz. On September 16, 1967, Roly married the love of his life, Lois (Peterson). Together, Roly and his wife Otis raised three children. Roly was a fun loving and caring man that was ready to give you his shirt off his back, finish your leftovers, watch a game, have a beer or just tell you how something should be done. Whatever it was, he always did it with a smile. Roly loved life, because he had everything that made life worth living. To Roly, those things were his family, friends, arguing about politics, going for rides that usually ended at a casino, anything pickled, scrapping, big steaks, stinky cheese, playing cards, fishing, deer camp debauchery, buffets, taking short cuts that had nothing to do with the destination, and telling stories about everything above. He marched to the beat of his own drum which made him a force to be reckoned. He lived his life with no regrets. There were however, three things that he didn’t like: hearsay, B.S, and the “DNR”. Roly worked for Georgia Pacific in Neenah for over 42 years in various positions and retired as an Electrician; this is where we believe his love of wires turned into a full time “passion of scrapping”. Roly could be seen at all hours of the day or night tearing apart motors, and stripping wires to satisfy what some people would call a strange obsession with copper. Roly is survived by his wife Lois, son Roland (Pam) Marotz, daughters Brenda (Dean) Mohl and Jessica (Mark) Ennis. His grandchildren Amanda (Nick) Hudzinski, Alishia Marotz, Nick and Zach Mohl, Josh, Jeremiah, Matthew and Luke Ennis and great grandchildren Sophia, Addison and Russell James Hudzinski and Lillian Marotz. His brother, four sisters, the outlaws, numerous nieces, nephews, cousins, and his partners in crime Ron, Jeff and Whaleman. He was proceeded in death by his parents Arthur and Viola Marotz. Dad-We-love-you A memorial service will be held on Friday September 25, 2020 at 4 pm at the Holly Funeral Home in Waupaca. A memorial gathering will be held on Friday from 2 pm until the time of the service at 4 pm at the funeral home. Holly Funeral Home wants to remind public that no more than 75 people will be allowed in the funeral home at one time with wearing of face masks and physical distancing observed. In lieu of flowers, please donate to YOUR local first responders. Like Roly, they’re committed to families too!

The family of Roly (Roland) Marotz created this Life Tributes page to make it easy to share your memories.

Send flowers to the Marotz family.