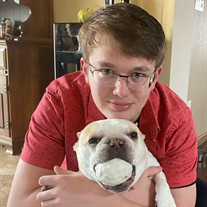 Ryan T. Ames, age 16, of Weyauwega, WI, passed away unexpectedly on Saturday, December 5th, 2020 at ThedaCare Medical Center-Waupaca. He was born in Portland, ME on March 12, 2004, a son of Bruce and Bambi (Ludden) Ames. Ryan was a very intelligent young man. He was an A/B student at Weyauwega-Fremont High School and enjoyed the challenges of advanced classes. He was very caring and always ready to lend an ear or give advice to his friends. Ryan had a great sense of humor and was always trying to get a laugh, by telling jokes, doing impressions and using funny voices. He was very creative as a child. He loved building things with Legos, playing with Thomas The Train sets, drawing and reading. Ryan loved the outdoors and enjoyed camping and snowmobiling. He was known as a bit of a daredevil from an early age, especially when his parents looked out the window to see him doing jumps at age 5 on his mini snowmobile. They nicknamed him "Flyin Ryan". He loved fancy sports cars, and playing sports such as football and golf. He loved animals, including the family pets of dogs and cats. He also enjoyed pet rats, and his fish Bumbo. Ryan had many natural talents. He loved music and was very active in Band. He played the Alto Sax and Flugelhorn, but his favorite was the Bari Sax. Recently he began learning to play drums and piano as well. Ryan was very active in FFA, and served as an officer - 2019 Sentinel and 2020 Reporter. Ryan received many FFA accomplishments and awards. He was selected for FFA State band; received 3rd place in Extemporaneous speaking; and got the Silver State Proficiency award for poultry production, to name a few. He was very active with the Parliamentary Procedure Team which he loved as well. Ryan was also very active in Boy Scouts. He was a Life Scout and had begun working on the highest honor of Eagle Scout, with a project to provide musical instruments for those that may not be able to afford them otherwise, to share his love of music with everyone. Ryan's real passion was magic. He was affectionately nicknamed "Magic Man" by most and was the "official" magician of Weyuwega-Fremont High School. He practiced tirelessly to perfect his tricks and always left everyone astounded with his flawless performances. He'd always smile with their amazed reactions and say "A Magician never reveals his secrets." Ryan had aspirations to go to college and wanted to be a band teacher or a neurosurgeon. Survivors include his Parents: Bruce and Bambi Ames, Weyauwega, WI; Brother: Kevin Ames, Weyauwega, WI; Grandparents: Linda Ames; and Sally and Charlie Abrahamson. He is further survived by many aunts, uncles, cousins, other relatives and friends. He was preceded in death by grandparents - Claton Ames, and Alma and Ronald Ludden. A Celebration of Ryan's Life will be held at a later date. A Go Fund Me account has generously been set up by Bambi's employer (My Pet Chicken) for Ryan to offset medical and memorial expenses. https://www.gofundme.com/f/ames-family-memorial-for-son?fbclid=IwAR3tP9USpAEJR4kZE78pd0MFGLzZ9IrwiyjYCKSrF_dLPJQ7sVp7ixihHtY The Holly Funeral Home of Waupaca is assisting the family with arrangements.

Ryan T. Ames, age 16, of Weyauwega, WI, passed away unexpectedly on Saturday, December 5th, 2020 at ThedaCare Medical Center-Waupaca. He was born in Portland, ME on March 12, 2004, a son of Bruce and Bambi (Ludden) Ames. Ryan was a very intelligent... View Obituary & Service Information

The family of Ryan T. Ames created this Life Tributes page to make it easy to share your memories.

Send flowers to the Ames family.