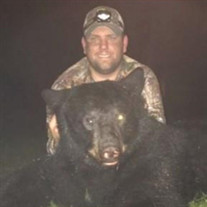 Ryan M. Giefer, age 32, of Waupaca, WI heartbreakingly left us on Wednesday, November 3, 2021. He was born February 20, 1989 in Appleton, WI; son of Donald Giefer and Julia (Engebretson) Motiff. After high school, Ryan attended UW-Stevens Point where he received his bachelors of science degree in Soil and Waste Resource Management. On September 20, 2014, Ryan married the love of his life, Rachel Vos, at Homestead Meadows in Appleton; together they created a beautiful family completed with the recent birth of their third child. Ryan loved fishing, hunting, and all things wildlife conservation and shared this passion with Rachel who would hunt alongside him. He became the Wastewater Superintendent at City of Wisconsin Rapids and was highly respected in his field. Ryan was intensely devoted to his family and many friends throughout his life. He will be deeply missed and never forgotten. Ryan is survived by his wife Rachel Giefer of Waupaca; his three children Harper, Griffin, and Millie Giefer of Waupaca; his mother Julie (step-father Steven) Motiff of Waupaca; his father Donald Giefer of Waupaca; a brother Jordan Giefer of Waupaca; a sister Taylor (boyfriend Luke Joski) Giefer of Green Bay; maternal grandparents Eugene and Patricia Engebretson of Waupaca; father-in-law and mother-in-law Thomas and Carie Vos of Waupaca; a brother-in-law Ryan (Eric) Vos-Orrington of Crystal, MN; step-sister Stephanie (fiancee Lynn Chheang) Motiff of Rogers, MN; step-brother Matthew (Melanie) Motiff and their daughter, Isla of Green Bay; step-grandmother Shirley (George) Blake of Green Bay; and also by numerous aunts, uncles, cousins, other relatives and many, many friends. He was preceded in death by his maternal great-grandparents Obert and Emma Engebretson & Perry and Jean Abrahamson; paternal grandparents Harry and Joan Giefer; and an aunt Mary DuFrane. A Funeral Service for Ryan will be on Thursday, November 11, 2021 at 6:00 PM at The Lakes Church, 153 County Road QQ, Waupaca, WI. Pastor Mary Bope will officiate. A visitation will be held on Thursday afternoon from 2:00 PM – 6:00 PM at the church. In lieu of flowers, a memorial is being established in Ryan’s name for his three children. A Go Fund Me has been established and organized by his step-sister, Stephanie Motiff. The Holly Funeral Home of Waupaca is assisting the family with arrangements.

The family of Ryan M. Giefer created this Life Tributes page to make it easy to share your memories.

Send flowers to the Giefer family.