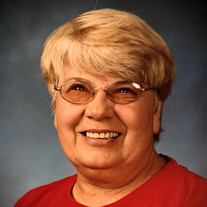 Sandy Louise Johanknecht, 75, passed away surrounded by her children on November 8, 2020. Sandy was born on April 14, 1945 to the late Frederick and Marion (Olson) Mannel. She was married to Gary Guyant (died on July 14, 2018) and had three children together. She later married James (Jimmy) Dale Johanknecht on April 2, 1992, who she was married to for 18 years until his death on October 28, 2010. As a young girl, Sandy was actively involved in the Girls Scouts, and later enjoyed her hobbies of bowling, square dancing, volleyball, and softball. Her greatest joy was watching her children at their sporting activities. Sandy had a very full life and enjoyed many occupations during her lifetime. She started working at her father's grocery store, The Market Basket, downtown Waupaca as a young girl. Her father taught her many skills at her time at the grocery store. She later worked at Glen's Supermarket, Drivas Drug store at the soda fountain, Woody's Cheese, and Bowlby's Candy Store. She spent most of her working career as a pharmacy technician at Riverside Community Hospital, and later at Walgreen's. Her last, and most fulfilling job was as an instructional aide at the Waupaca Learning Center where she enjoyed her time helping the teachers and children. She also was a trained Emergency Medical Technician and enjoyed her time working as an EMT on the ambulance and worked as a receptionist at Holly Funeral Home. Sandy officially retired on June 30, 2009 and spent her retirement spending time with her children and grandchildren. One of Sandy's greatest loves was animals. She would rescue any animal that came into her yard and feed every animal in the woods. She had so many litters of kittens born in her house that we lost count. Sandy was known as a very loving and generous person. She would always give anything she could to help anyone who needed it. Sandy is survived by her three children: Kevin (Michele) Guyant, Waupaca, WI; Lori Guyant, Jackson, WI; and Jennifer Guyant, Jackson, WI, and three step-children: Monte (Dawn) Johanknecht, Neenah, WI; Tami (Nick) Neitzel, Hartland, WI; and Scott (Viva) Johanknecht, Oshkosh, WI. She is also survived by many grandchildren, nieces, nephews, and other relatives. She is further survived by her sisters Vicki (Barry) Bishop and Julie (Ted) Thompson. She is preceded in death by her husband, Jimmy Johanknecht, and her parents. Memorial Services will be held at the Holly Funeral Home in Waupaca at 1 PM on Friday, November 20th, 2020. Memorial Visitation will be held on Friday, November 20th, from 10 AM until the time of the service at the funeral home. Burial will take place at Central WI Veteran's Memorial Cemetery, Town of Farmington, Waupaca Co. WI next to her husband, Jimmy. All monetary donations will be gifted to the Humane Society as that was Sandy's wish. Kevin, Lori, and Jenny would like to extend a special thank you to the staff at ThedaCare, Waupaca and the staff at Park Vista Legacy who made it possible for them to be with Sandy during her last hours. The Memorial Service will be recorded and then downloaded to the Holly Funeral Home website shortly after the service is finished. Holly Funeral Home would like to remind the public that no more than 75 people will be allowed in the funeral home at one time, with the wearing of face coverings and physical distancing observed. We sincerely encourage each person to make their decision whether to attend a visitation and/or service based on the best interest of their health and that of the community.

Sandy Louise Johanknecht, 75, passed away surrounded by her children on November 8, 2020. Sandy was born on April 14, 1945 to the late Frederick and Marion (Olson) Mannel. She was married to Gary Guyant (died on July 14, 2018) and had three... View Obituary & Service Information

The family of Sandra "Sandy" L. Johanknecht created this Life Tributes page to make it easy to share your memories.

Sandy Louise Johanknecht, 75, passed away surrounded by her children...

Send flowers to the Johanknecht family.