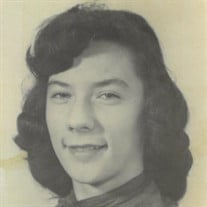 Shirley Mae Mary Cady, age 80, of Iola, WI, passed away peacefully at her home with her family by her side on Saturday, April 3, 2021. She was born October 20, 1940 in Big Falls, WI; daughter of Thomas and Sarah (Peterson) Martin. On May 5, 1956, she married LaVern Cady in Waupaca, WI and together they shared 57 years of marriage before his passing on November 18, 2013. Shirley worked as a unit clerk at the Wisconsin Veterans Home in King, WI for 20+ years. She will be dearly missed by all of her loving family and many friends. Shirley is survived by her three children, Bruce (Barb) Cady of Ogdensburg, WI, Sandra (special friend, Pat) Cady of Pelican Lake, WI, and Lisa (Jim) Piasecki of Rhinelander, WI; five grandchildren, Jennifer Garton of Iola, WI, Tim (May) Cady of Ogdensburg, WI, Brett Cady of Ogdensburg, WI, Joshua (Ashley) Cady of Rhinelander, WI, and Jordan Jaensch of Rhinelander, WI; four great-grandchildren, Ariana (Matt) Matheny of Oshkosh, WI, Sierra Garton of Iola, WI, Brynn Garton of Iola, WI, and Jayden Cady of Ogdensburg, WI; a great-great-granddaughter, Audrey Matheny who was born on April 5, 2021; one sister, Darlene (Allen) Andersen of Tigerton, WI; two sisters-in-law, Beverly Cady and Mardell Boehm; and also by numerous nieces, nephews, other relatives and friends. She was preceded in death by her parents, Thomas and Sarah Martin; her husband, LaVern Cady; a grandson, Justin Jaensch; an infant sister, Patsy Martin; and six brothers-in-law, Roland Cady (infant), Lowell (Gwen) Cady, Wilmer “Stringbean” Cady, Arnold “Charlie” Cady, Lyle (Bev) Cady, and Arden Cady. A Funeral Service will be on Thursday, April 8, 2021 at 1:00 PM at the Holly Funeral Home in Waupaca, WI. Pastor Mary Bope will officiate. A visitation will be held on Thursday afternoon from 12:00 PM – 1:00 PM at the Holly Funeral Home. Burial will be at Big Falls Cemetery in the Town of Wyoming following the service on Thursday afternoon. The Holly Funeral Home of Waupaca is assisting the family with arrangements. The family would like to thank all her caregivers, Robin, Chris A., Chris, Cindy, Suzy, Yvonne, Ashley, Sandy, and last but not least, her granddaughter, Jenni, and great-granddaughters, Sierra, Ariana, and Brynn. Also, we would like to thank Marshfield Clinic – Stevens Point Cancer Center and Compassus Hospice. The special care Shirley received will never be forgotten.

Shirley Mae Mary Cady, age 80, of Iola, WI, passed away peacefully at her home with her family by her side on Saturday, April 3, 2021. She was born October 20, 1940 in Big Falls, WI; daughter of Thomas and Sarah (Peterson) Martin. On May 5,... View Obituary & Service Information

The family of Shirley M.M. Cady created this Life Tributes page to make it easy to share your memories.

Send flowers to the Cady family.