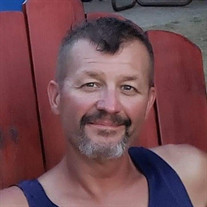 Steven T. Canterbury, 45, passed away at Aspirus Hospital in Wausau after a courageous battle with cancer. He was born on June 6th, 1975, to Robert and Eugenia (Ponomarenko) Canterbury. He married Angela (Spaulding) Canterbury on July 17th, 1995 in Waupaca, WI. During their 25 years of marriage, they were blessed with two amazing sons, Steven (24 years old) and Brenden Canterbury (21 years old). Steve graduated from Waupaca High School in 1993. He then went on to serve honorably in the United States Marine Corps. He was stationed at Kaneohe Bay Marine Corps Base Hawaii where he served with and made lifelong friends with his fellow Marine Corps brothers and sisters. There, he and Angela started their family with the birth of their first son, Steven Canterbury, Jr. After he completed his service in 1997, they returned home to settle down in Waupaca. He started working at Waupaca Foundry in 1997 and faithfully worked there until his passing. They completed their family with the birth of their second son, Brenden Canterbury, in 1999. Steve will be deeply missed by his wife Angela, of Waupaca; his children: Steven (girlfriend Abigail Christensen) of New London, and Brenden of Waupaca. The family is expecting their first grandchild Delilah in April 2021. He is survived by his parents, Robert and Eugenia Canterbury, his brothers: Danial Canterbury (Sally Miller) of New London, and Michael (Amy) Canterbury of Weyauwega. He is also survived by his sisters-in-law: Suzanne (Mutasem) Elbooz of Tampa, FL, Erica Spaulding of Waupaca, Cori (Kenneth) Nowakowski of Valdosta, GA and brother-in-law Jasen Stanke (fiancee Tanya White) of Oshkosh. He also has many cousins, nieces and nephews, extended family, and friends. He was preceded in death by his paternal grandparents James and Jane Canterbury, his maternal grandparents Semen Ponomarenko and Pelahij Tarasenko, his mother-in-law Debra Stanke, brother-in-law Shaun Spaulding, and Uncle's Larry "Rock" Dhabalt and Boris "Jake" Ponomarenko. Steve thoroughly enjoyed camping, riding his motorcycle and snowmobile, fishing and hunting. But most of all, his biggest passion was spending time with his family and watching his sons play sports. His family would like to offer special thanks to the doctors, nurses and staff of Aspirus Hospital and other family and friends who made special visits during his final days and prayed for him. Each one of you touched his life and our family, and made this journey a little brighter. Steve will be forever and always Loved, “Until we meet again” Love Angela, Steven and Brenden. A visitation will take place at The A.J. Holly and Sons Funeral Home in Waupaca, on Thursday, January 28th from 4-7pm, then on Friday, January 29th from 10-11am at funeral home with a funeral service to follow at 11 am. Military Honors will follow service.

Steven T. Canterbury, 45, passed away at Aspirus Hospital in Wausau after a courageous battle with cancer. He was born on June 6th, 1975, to Robert and Eugenia (Ponomarenko) Canterbury. He married Angela (Spaulding) Canterbury on July 17th,... View Obituary & Service Information

The family of Steven T. Canterbury created this Life Tributes page to make it easy to share your memories.

Steven T. Canterbury, 45, passed away at Aspirus Hospital in...

Send flowers to the Canterbury family.