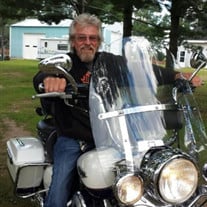 Terry L. Diemel, of Mt. Morris, WI, passed away peacefully on Saturday, June 27, 2020 at the dream home he shared with his wife, Connie. He was born May 😊, 1953 in Clintonville, WI; son of Lloyd “Jiggs” Diemel and Shirley (Olson) Niemuth. On September 22, 1978, Terry married Connie M. Leopold in Appleton, WI and together they shared almost 35 years of marriage before her passing on August 18, 2013. He enjoyed riding his Harley, hunting, fishing, and woodworking. Terry also enjoyed shooting pool with his buddies and celebrating his multiple birthdays every year in which nobody really knew the actual day. He will be deeply missed by all of his loving family and many friends. Terry is survived by his four children, David (Shar) Damro of Omro, WI, Travis (Angie) Diemel of Iola, WI, Tara (Morry) Anderson of Appleton, WI, and Casey (Jodi) Diemel of Waupaca, WI; grandchildren, Olivia and Avery Damro of Omro, WI, Carson Munoz and Taylor Diemel of Iola, WI, and Micah, Hailee, and Codey Anderson of Appleton, WI; five siblings, Connie (John) Krull of Appleton, WI, Ron (Bonnie) Diemel of Menasha, WI, Vicki (Bob) Kumbier of Pickett, WI, Kim (Joe) Bednarowski of Pickett, WI, and Junior (Linda) Niemuth of Appleton, WI. He is also survived by numerous nieces, nephews, other relatives and many friends. He was preceded in death by his father, Lloyd “Jiggs” Diemel; his mother and step-father, Shirley (Glen) Niemuth; and his loving wife, Connie Diemel. A Celebration of Terry’s Life will be held on Saturday, August 15, 2020 from 12:00 Noon – 4:00 PM at the Hideaway Bar & Grill in Mt. Morris, Waushara Co., WI. The Holly Funeral Home of Wild Rose is assisting the family with arrangements.

The family of Terry L. Diemel created this Life Tributes page to make it easy to share your memories.

Send flowers to the Diemel family.