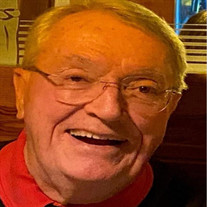 Thomas “Tom” James McNamara, 74, passed away unexpectedly on December 21, 2020. He was born February 13, 1946 in Fond du Lac to James and Genevieve (Johnson) McNamara. He graduated in (1964) from St. Mary's Springs High School and then Spencerian College (1966) to pursue a career in court reporting. Thomas served in the U.S. Army and is a Vietnam Veteran and was part of the Judge Advocate General’s Corps. On June 6, 1970 he married Sherri Johnson in Appleton, and were married for 25 years and had three children. Thomas enjoyed spending time with his children, grandchildren, and friends. He was active in boys' youth baseball in Grand Chute as a coach when his sons Jon and Ryan were playing, and named Little League coach of the year in Wisconsin during his tenure. He worked as an official court reporter for the circuit courts in Outagamie and Waupaca counties for his entire career, making many long lasting friendships along the way. Thomas always had a kind and gentle sense of humor and welcoming heart. He enjoyed good food, Brewers baseball, current events, storytelling, and people. He was an incredible mentor, coach, sports fan, and father. Thomas attended Saint Mary Magdalene Catholic Church in Waupaca. Thomas is survived by his loving and devoted children, Meggin (Steve Horn) McNamara, Jon McNamara, and Ryan McNamara, two grandchildren, Eva and Kaden Horn. He is further survived by his former wife and mother of his children Sherri McNamara, special friend Linda Rodenz, and many other relatives and friends. Thomas was preceded in death by his parents, James and Genevieve, and sister Sarah. A celebration of Thomas's life will take occur later as a small family gathering. Cremation has taken place.

The family of Thomas "Tom" McNamara created this Life Tributes page to make it easy to share your memories.

Send flowers to the McNamara family.