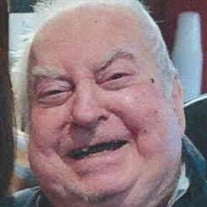 Thomas Farrell O’Neil passed away peacefully at Waupaca ThedaCare hospital on August 20, 2021. He was 83 years old and spent his last years having fun at the King, WI Veterans home. Tom was born on Nov. 13, 1937 in New London, WI and spent his early years there, graduating from Washington High School in 1955. He was captain of the football team and homecoming king. Thomas set a conference record with a 95 yard punt return for a touchdown against Two Rivers. After graduation, he enlisted in the U.S. Navy and spent 26 months at Subic Bay in the Philippines. Upon his honorable discharge he graduated from UW Whitewater and in 1968 received an advanced degree from NIU in DeKalb, IL. Thomas spent most of his career in Rockford, IL with Atwood Machine Co: an automotive metal stamper with 9 plants and 4000 employees. Thomas was corporate controller and for the last three years plant manager of the largest plant of 800 people. In 1970 Tom started a T-ball league with 120 children which grew to over 1000 children, which he then turned over to the park district. In 1980 he purchased a golf bag manufacture in Marinette WI. Years later in Las Vegas, he entered into a joint venture with Shanghai, China to sell Chinese cigarettes in the 16 western states of the USA. While in Las Vegas, Thomas became a blackjack tournament champion. In 2003, Thomas moved to Kunming, China where he lived and worked for the Talmin Group in Hong Kong for several years before returning to the USA. Thomas is survived by four children: Ann (Mark), John (Theresa), Mary (Pete), and Kathleen (Shawn) and 9 grandchildren. Tom is also survived by four siblings: Mike, Kathy, Jim, and Jerry (Denise). Preceding him in death were his parents Lester and Dorothy O’Neil, a sister Patricia (Phil), a brother-in-law Gary, and a sister-in-law Jody, and two grandsons, Claude and Reese. Thomas Farrell O’Neil has left a lasting impression of enthusiasm and encouragement to many people and often spoke of having very good parents. He loved to tell the story of reaching a childhood goal of buying his mother a mink coat - many years later when she was older. A short graveside ceremony will be at the King Veterans Home in early September. There will be a memorial event at a later date. A donation in the name of Thomas Farrell O’Neil will be shared with the Veterans Group in Waupaca.

Thomas Farrell O&#8217;Neil passed away peacefully at Waupaca ThedaCare hospital on August 20, 2021. He was 83 years old and spent his last years having fun at the King, WI Veterans home. Tom was born on Nov. 13, 1937 in New London, WI and spent... View Obituary & Service Information

The family of Thomas F. O'Neil created this Life Tributes page to make it easy to share your memories.

Send flowers to the O'Neil family.