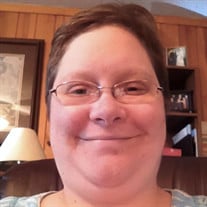 Tiffany Leigh Bender was born December 3, 1982 in Waupaca, Wisconsin. She began school in Waupaca, then lived about six years each in Yuma, Arizona; Ames, Iowa; and Tom's River, New Jersey before returning to Wisconsin permanently in 2008. She attended Scattergood Friends School in West Branch, Iowa where she eagerly mastered weaving and crafting stained glass, although she was less enthusiastic about all the farming. She graduated from Ames High School in 2000. A car accident in her twenties left Tiffany with severe, chronic pain in her spine, but she managed both jobs and school. She earned an AA degree in paralegal studies from Brookdale Community College in New Jersey and studied business and accountancy with a focus in marketing at UW-Stevens Point. Over the years, she worked as a paralegal, salesclerk, barrista, engraver, carnival ride operator, and teleworker. In 2014, she earned a Top Sales Performance Award at Lands' End in Stevens Point, where she worked for six years. But it was neither her education nor career that was her life's focus. Tiffany cherished relationships. She kept up with everyone, celebrated their big events, listened empathetically when they had troubles, and made a difference when she could with thoughtful gifts and actions. A whiz at troubleshooting, she was everyone's first call for help with technical issues or assembling IKEA furniture. For the last three years, she was her grandmother's principal caregiver and a beloved "aunt" to her cousin's children. Tiffany openly shared her struggles with bipolar disorder and the relief she found with ECT treatments. She encouraged everyone to shed any sense of shame about mental illness and to find the treatments and adaptations that worked for them. Tiffany loved reading, baking bread, writing songs, crafting, and cuddling her dog, Marley. She followed the Packers and the Brewers and adored "Murder She Wrote," British panel shows, stand-up comedy, classic movies, and Jane Austen adaptations. This year, she reviewed advance book copies for online authors and enthused about her growing connection to that community. She was a committed Democrat who cared about social justice, integrity, fairness, and every citizen's responsibility to be informed and to vote, whatever their views. She respected former Presidents Jimmy Carter and Barack Obama, especially admired Justice Ruth Bader Ginsburg, and was overjoyed at the election of Joe Biden last Saturday. Each of Tiffany's friends and family members can tell of a special time they had with her and of plans they had for more when a sudden, non-COVID infection took her life on Monday, November 9, 2020. She was thirty-seven, nearing her thirty-eighth birthday on December 3rd. Mourning her passing are her mother, Caryl Louise Bender of Waupaca, sister Jessica Bender-Nettleton of Stevens Point, sister Kenna Reese of Utah, sister Danielle Christensen of Utah, grandmother Marion Ellen Bender of Waupaca, grandmother Mary Hitesman of Utah, aunts Barbara Herrick (Reeder) of Sturgeon Bay, Wisconsin and Patti Bender (Pat Fleming) of Lawrence, Kansas; cousins Bonnie Pratt (Mark) of Anthem, Arizona; Cindy English (Chris) of Gilbert, Arizona; Nancy Daoust (Nathan) of Sturgeon Bay; Emily Murphy of Waupaca and her children, Caleb, Logan and Leila; Kyle Bender of Queen Creek, Arizona; Nicole Bender-Ream of Stevens Point, Katie Bahr-Bender (Jordan) of Stevens Point, Scott Konzem (Rachel Voorhies) of Alexandria, Virginia; Sally Burns (Andy) of Keizer, Oregon; and many more cousins and friends, far and near. Preceding her in death were her grandfather, Gordon Lawrence Bender, and her aunt, Judy Bender-Ream, both of Waupaca; also sister Christina Hitesman and grandfather Dale Hitesman, both of Utah. Tiffany Bender's cremains will be interred at Crystal Lake Cemetery in Waupaca. The Holly Funeral Home of Waupaca, Wisconsin is assisting the family with local arrangements. Instead of a funeral, Tiffany requested a "big, happy party" in her name, which will be held as soon as family and friends can safely gather again. In lieu of flowers, the family suggests donations to the charities she contributed to and held dear: Big Fluffy Dog Rescue (online or P.O. Box 332161, Nashville, TN 37203) or Heifer International (www.heifer.org).

Tiffany Leigh Bender was born December 3, 1982 in Waupaca, Wisconsin. She began school in Waupaca, then lived about six years each in Yuma, Arizona; Ames, Iowa; and Tom's River, New Jersey before returning to Wisconsin permanently in 2008. She... View Obituary & Service Information

The family of Tiffany L. Bender created this Life Tributes page to make it easy to share your memories.

Send flowers to the Bender family.