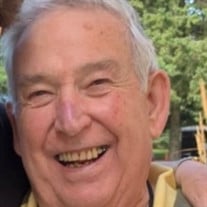 Timothy George Hayes passed away on April 7, 2022. He was 82. The youngest of four, Tim was born at home in Horicon, Wis., in the middle of a snowstorm after the doctor arrived by horse drawn sleigh. He was orphaned as a child and raised by a cousin, Francis Heckman, who made him go to church A LOT and loved him with all her heart. The feeling was mutual. There was nothing Tim enjoyed more than socializing. He spent his college years at UW Oshkosh bartending, drinking manhattans, making lifelong friends and meeting the love of his life, Renee La Sage. According to family lore, Tim didn't know he graduated from college until he tried to register for classes one semester and was told he finished. Tim married Renee on a sunny July day in 1966 and promptly enlisted in the US Navy where he served for 2 years before settling in Waupaca with his wife and baby boy. When their family grew to include a girl and another boy, Tim gave up bartending to pursue a career with regular hours. He worked for many years in the video game and vending industry delighting his kids and all their friends with a basement complete with a juke box and pinball machine. Tim attended boy scout jamborees, all-star wrestling matches and high school musicals just to see his kids smile; he switched from manhattans to beer just to see his wife smile. In later years, Tim enjoyed spending time with his grandchildren whether it was watching movies, attending dance recitals, or cheering at lacrosse games. Every gift he received was the best thing he ever opened. You could wrap up a box of rocks and he would smile like you just gave him a million dollars. Tim and Renee shared a life full of memories with family and great friends including many good times at the Waupaca Country Club and Simpson's as well as trips to Door County and golf courses and casinos around the Midwest. They loved visiting their kids and attending Badger tailgates, trying new restaurants, and taking the occasional trip across the country. Until last year, Tim kept busy working as a courtesy driver at Neuville Motors where he loved chatting with the ladies in the office and just about anyone else who crossed his path. If you've ever worked at any business in town, Tim likely knew your name. He asked about your family, and he cared about your answer. In Tim's memory, his family hopes that you will take a little extra time to say hello to the familiar faces in your life. And the next time you're out with your family or friends, say a little toast to a life well lived. Tim is survived by his wife of 55 years, Renee Hayes; their children, John (Jenny) Hayes, Laura (Joe) Cruz, and James Hayes; grandchildren, Jordan, Jake, Nick, and Alaina Hayes; Joey, Jules and Cooper Cruz; and Abby Hayes. Visitation will be on Sunday, April 24 from 11 a.m. to 1 p.m. at Holly Funeral Home in Waupaca. A very brief moment of remembrance will immediately follow the visitation. In lieu of flowers, memorials can be made to the family in care of Renee Hayes, P.O. Box 184, Waupaca, WI, 54981.

Timothy George Hayes passed away on April 7, 2022. He was 82. The youngest of four, Tim was born at home in Horicon, Wis., in the middle of a snowstorm after the doctor arrived by horse drawn sleigh. He was orphaned as a child and raised... View Obituary & Service Information

The family of Timothy G. Hayes created this Life Tributes page to make it easy to share your memories.

Send flowers to the Hayes family.