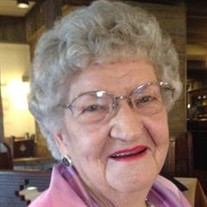 Virginia Mae Stark Houdek, 90, of Iola, WI, passed away unexpectedly on Friday, July 16, 2021. She was born in Montevideo, MN September 8, 1930, daughter of William and Genevieve (Sailer) Stark. Virginia met the love of her life, John Houdek Sr., while working as dining room manager at Arrowhead Golf Course and was his partner in business for Houdek Golf Course Construction. They enjoyed 60 years together until his passing in 2013. She also worked as office manager for Pearson-Agri Systems Inc. after moving from Glen Ellyn, IL to Amherst, WI. Anyone who met Virginia knew she was very “spirited”, had a fierce commitment and love for her family and friends and was the matriarch for the “Houdek Women”. She was a remarkable woman in her accomplishments and excelled as a leader. If you wanted a political or current events debate - she could certainly hold her own. She was President and member emeritus of DuPage Women’s Bowling Association; President of Glacier Wood Golf Club - where she fueled her passion for golf and shot a hole-in-one. She loved singing and was a talented dramatic soprano soloist performing in Chicago area clubs with big bands, at Gary United Methodist Church in Wheaton, IL, ensembles in the Chicagoland area, and loved to sing to each of her great-grandchildren. She adored her grandchildren and would attend each of their activities sitting front and center and ready with the biggest hug afterward. Virginia was known for her love of watching both Glenbard West and Amherst athletics, Freddie’s Club Orlow league softball, Brewers, golf tournaments and was #1 fan of “Da Pack”. She would also be remembered for her flashy sense of style and her “good luck” glittery jewelry she wore daily. Virginia is survived by two of her children, Kathleen (Peter) Connolly of Wayne, IL, and Karen (Michael) Glodowski of Amherst WI and her sister Beverly (Banko) Snyder. Two granddaughters Jennifer (Brandon) Wolding of Lyons, CO and Kate (Jordan) Lutz of Medford, WI, and grandson Erik (Colette) Connolly of Chicago, IL. She also had six great-grandchildren Evelyn and Lael Wolding; Nolan and Lucy Lutz; Logan and Reese Connolly. She was preceded in death by her husband John Houdek Sr, and beloved son John Houdek Jr., parents, William and Genevieve Stark, brother Edward Stark, and sisters Marion Santilli and Barbara Kopp. Thank you to the staff at Living Oaks Assisted Living in Iola for the loving, compassionate support. A private family celebration of life for Virginia will be held at a later date. The Jungers-Holly Funeral Home of Amherst is assisting with arrangements.

The family of Virginia S. Houdek created this Life Tributes page to make it easy to share your memories.

Send flowers to the Houdek family.