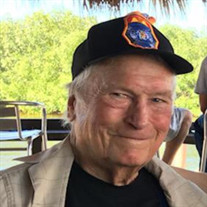 William “Bill” F. Appleton, Jr., age 85, of Waupaca, passed away peacefully at his home with his family by his side on Tuesday, March 23, 2021. A man of many nicknames such as “Chief”, “Willy”, Willhelm”, “Stach” (pronounced stosch), “Outback Bill”, “Blue Eyes”, “BillGuy” and his most important one, “Dad”, Bill was a simple, but diverse man with great passion for family, friends and life. Born January 6, 1936 in Kaukauna, WI to William Sr. and Loretta (Schuh) Appleton, and being the only son in the house, Bill spent his formative years lovingly playing pranks on his sisters Dorothy, Pat, Mary Jane and Suzy. He served in the U.S. Army from 1954 through 1956, spending two years in Army Intelligence in Heidelberg, Germany, developing a lasting affinity for the city and the country. After returning home, Bill went to work for the Kaukauna Police Department and went on to have a 36-year career, advancing into the Juvenile Officer position, and for the last 10 years, as the Chief of Police. Early on, as working night shifts in a small town could be pretty quiet, he taught himself to play a tiny four hole Hohner harmonica. Throughout the years he was famous for regaling those nearby with his rendition of “Wildwood Flower”, always to be followed by “I used to play piano, but this is easier to carry around”. On a windy June day in 1966, Bill married the love of his life, Carol A. Hoffmann at St. Mary’s Catholic Parish in Bear Creek. They went on to have a family of son, Scott, daughter, Ellen and “Favorite Son in Law” Mick. Always busy, Bill developed a successful side business with one of his passions, billiards, and played in many different pool leagues over the years. His love of aviation led him to get his pilot’s license, and he partnered with friends in several airplanes. Canadian fishing trips, and deer hunting were always on the yearly docket, as well as family camping trips across the US and Canada, and an epic adventure with Carol to Australia and New Zealand (hence “Outback Bill). Retiring in 1993, Bill and Carol relocated to their dream home in Waupaca, WI. He had a love for his 4pm Manhattan on the deck, or a “decker” as it was known, and according to family and friends he also made one heck of an Old Fashioned. Bill was also very civic minded enjoying his time with the Knights of Columbus, the Lions Club, The VFW, Wisconsin Law Enforcement Officers Association, as well as entertaining with his German music group, The Happy Wanderers. Bill will be dearly missed by all of his loving family and many friends. He is survived by his immediate family, wife of 54 years, Carol Appleton of Waupaca, WI; son, Scott Appleton, daughter, Ellen and her husband Michael “Mick” Appleton-Adkins, all of Nashville, TN; and sister, Susan Appleton of Neenah, WI. He was preceded in death by his parents, William Sr. and Loretta and sisters, Dorothy Appleton, Patricia Appleton-Dietzen and Mary Jane Appleton. A Funeral Mass will be on Saturday, March 27, 2021 at 10:30 AM at St. Patrick’s Catholic Church – Lebanon, N5705 County Road T, New London, WI. Father John Kleinschmidt and Father Ted Lewandowski will preside. A visitation will be held on Saturday morning from 9:00 AM – 10:30 AM at the church. Burial will take place following the funeral mass at Holy Cross Cemetery in Kaukauna where full military honors will be performed. In lieu of flowers, a memorial has been established in the name of William “Bill” Appleton, Jr. and may be mailed to the Holly Funeral Home, PO Box 254, Waupaca, WI 54981. The Holly Funeral Home of Waupaca is assisting the family with arrangements.

The family of William F. Appleton, Jr. created this Life Tributes page to make it easy to share your memories.