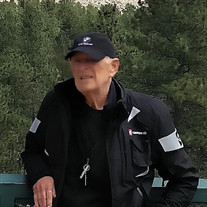 William “Bill” Walczak, age 80 of Amherst, WI passed away on Saturday, July 31, 2021 in Appleton, WI. Bill was born on July 13, 1941 son of the late Stanley and Adeline (Kobishop) Walczak in Stevens Point, WI. Bill owned and operated the B.S. Inn Bar in Amherst for over 40 years. He had a passion for motorcycles and traveled all over the country on his motorcycles. On December 27, 1983 he was united in marriage with Ginger Artz in Stevens Point, WI; she preceded him in death on August 12, 2014. Bill is survived by his son, Wade Walczak of New Berlin, WI; daughters, Betsy Walczak of Rosholt, WI; Ginger (Dan) VanDaalwyk of Kaukauna, WI; two grandchildren, Christian and Vivian Utecht; brother, Frederick (Mary Ann) Walczak of Stevens Point, WI; also, many other nieces, nephews, other relatives and friends. Bill is preceded in death by his wife, parents, daughter, Courtney Walczak, siblings, Lorraine, Stanley Jr., Dorothy, Richard, Raymond, Eugene, Madeline, Adeline, Robert, and Kenneth. A Memorial Mass will be held at 11:00 AM on Saturday, August 28, 2021 at St. James Catholic Church in Amherst. Visitation will be held from 10:00 AM until time of Mass at the Church. Jungers-Holly Funeral Home of Amherst is assisting the family with arrangements.

The family of William "Bill" L. Walczak created this Life Tributes page to make it easy to share your memories.

Send flowers to the Walczak family.