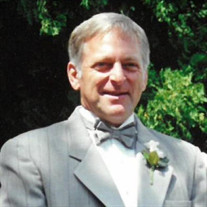 William N. Olson, age 79, of Amherst, WI, passed away on Tuesday, July 7, 2020 with his daughter by his side. He was born February 1, 1941 in Amherst, WI; son of Wilhelm and Alta (Atwood) Olson. Bill served in the U.S. Army from December 12, 1963 until he was honorably discharged on November 30, 1965. On November 25, 1967, he married Susan Wallick in Loyal, WI and together they shared close to 50 years of marriage before her passing on February 20, 2017. Bill will be dearly missed by all of his loving family and friends. Bill is survived by his daughter, Brenna Olson of Amherst Jct.; his three sisters, Sonja Peterson of Amherst, Marilyn (Norman) Mortenson of Iola, and Roberta (Dale) Louison of Iola; along with many nieces, nephews, other relatives and friends. He was preceded in death by his parents, Wilhelm and Alta Olson; his loving wife, Susan Olson; a brother-in-law, Allen Peterson; and a special nephew, Todd Louison. Per Bill’s wishes, no services will be held. The Jungers-Holly Funeral Home of Amherst is assisting the family with arrangements. In lieu of flowers, please consider a donation to Wounded Warriors, an organization that Bill was a passionate and devoted supporter of.

The family of William N. Olson created this Life Tributes page to make it easy to share your memories.

Send flowers to the Olson family.