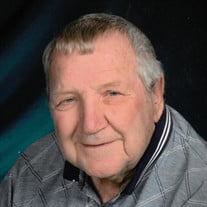 Gene A. (The Knobb) Baumann, 85, of Wild Rose passed away on Friday, November 27, 2020. Gene was born November 26, 1935 in Merrill, WI to William and Bernita Baumann. He is survived by his wife Edith (Thone) Baumann, daughter Judith (Brian) Fulkerson of Cherry Valley, IL, grandsons Michael Fulkerson of Cherry Valley Il and David Fulkerson of Tuscumbia AL, one sister, Lois Rucich of Muskego, WI, one sister-in-law Linda Baumann of Rockbridge Baths, VA and numerous nieces, nephews, great nieces and nephews, great- great nieces and friends. Preceded in death by his parents, one son Ricky Gene Baumann, half-brothers Paul and Roy Dochterman and brothers Russell, Donald, Ralph, and Harold. Gene served in the US Army as well as the Army Reserves and was very active in the American Legion Post 219, Town of Milwaukee. He was an integral part of their annual Christmas party, corn roast fundraiser, annual conventions and poppy sales. He was active in his church, St Paul Lutheran in Wild Rose. He lent his baking skills to their annual bake sales, supplying many pies. Gene was an avid sports enthusiast. He played sports all his life. He played and umpired softball as well as refereeing football and basketball in his younger days. He continued to play into his 80s with the Kids and Kubs Softball organization in St. Petersburg FL. He was also a big sports fan. He most enjoyed watching the Packers and the Brewers. He was also an outdoorsman. He enjoyed hunting, fishing and watching the deer, turkeys, birds and other critters that roamed his property. A memorial celebration will take place from 11 am to 1 pm on Friday December 4, 2020 at the Holly Funeral Home in Wild Rose WI, followed by a memorial service at 1pm. Pastor Brian Roehrborn will officiate. Inurnment at Highland Memorial Park, New Berlin, WI at a later date.

Gene A. (The Knobb) Baumann, 85, of Wild Rose passed away on Friday, November 27, 2020. Gene was born November 26, 1935 in Merrill, WI to William and Bernita Baumann. He is survived by his wife Edith (Thone) Baumann, daughter Judith (Brian)... View Obituary & Service Information

The family of Gene A. Baumann created this Life Tributes page to make it easy to share your memories.

Send flowers to the Baumann family.