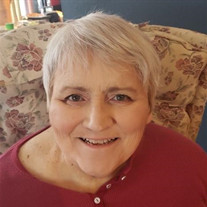 Judith Marie "Judy" Bender was born December 24, 1951 at Bemidji, Minnesota to Dr. Gordon Lawrence Bender and Marion Ellen (Johnson) Bender. She passed away January 30, 2020 at Theda Care Regional Medical Center in Appleton, Wisconsin. She was 68. Judy grew up in Tempe, Arizona, where her father was a Professor of Zoology at Arizona State University and her mother served in many roles for the Episcopal Diocese of Arizona. Except for a year in Bethesda, Maryland, Judy attended the public schools of Tempe and graduated in 1969 from Tempe High School where she was on the yearbook staff. Judy grew up swimming, camping, and boating in the desert southwest and attended church camp in Prescott, Arizona, both as a camper and a counselor. With her family, she visited her paternal grandparents each summer at the Chain O'Lakes in Waupaca, Wisconsin. Judy attended Northern Arizona University for one year, then transferred to Arizona State University, where she earned a B.S. degree in home economics with an emphasis in family and child development in 1974. One summer, Judy and a friend drove from Arizona to Fairbanks, Alaska and then she continued on to Hawaii for an adventure on her own. She taught Head Start several years and earned her M.Ed. in deaf education at Lewis & Clark College in 1981. Judy married John Thomas Ream on March 19, 1982 and lived in the Bender family home in Tempe. Three children were born--Emily Desiree, Kyle Lawrence, and Nicole Marie--and Judy taught in the area schools. A short move to Kearney, Arizona was followed by another to Yuma, where her fourth child, Kathryn Elizabeth, was born. Widowed in 1990, Judy moved to Prescott Valley where she raised her four children on her own and built a respected career as a teacher of the deaf and hard of hearing. She taught in the public schools of Mesa, Kearney, and Yuma, and at the Arizona State School for the Deaf and Blind. She was a compassionate and strong advocate for her students' success and mentored other young professionals to become teachers of the deaf. Her students remembered her as one who made learning fun, inspired them to strive, and developed their "puzzle-thinking" skills. After nearly thirty years of teaching, she retired in 2007 and moved to Waupaca, Wisconsin to be near when her parents needed help. Judy had the biggest heart and spent a lifetime giving it freely to everyone she knew. Shy in a group, she loved getting together to talk with family or a good friend. She was sentimental about the people and events of every stage of her life, and she had a sharp memory for them. She also had an uncanny ability to multiply large numbers in only seconds, did beautiful embroidery work, and made the greatest Mexican food. Everyone knew her soft spot for animals, which resulted in a lifetime of beloved dogs, cats, and the occasional bird or lizard. Judy endured significant losses and hardships in her life, but she always showed up for the ones she loved. She listened with genuine interest, was ready with a happy laugh, and supported unconditionally. "Our phone calls were rarely quick, our hugs were never short, and our laughter could go on and on." Judy was preceded in death by her father. Holding her close in memory are her mother, Marion Bender; her children, Emily Murphy, Kyle Bender, Nicole Bender-Ream, and Katie Bender-Ream; her grandchildren, Caleb, Logan, and Leila Murphy; her sisters, Barbara (Reeder) Herrick, Caryl Bender, and Patti Bender (Patrick Fleming); nieces and nephews, Bonnie (Mark) Pratt, Cindy (Chris) English, Nancy (Nathan) Daoust, Jessica and Tiffany Bender, Scott Konzem (Rachel Voorhies), and Sally (Andy) Burns; plus a host of extended family and close, long-time friends. Services will be held on Wednesday February 5, 2020 at 11:00 a.m. at Crystal Lake Methodist Church on Highway K in Dayton Township, Waupaca. A visitation will be held on Wednesday from 10:00-11:00 a.m. at the church. The Holly Funeral Home of Waupaca, Wisconsin is assisting the family with local arrangements. Gifts in her name may be made to: Arizona State Schools for the Deaf and Blind-North Central Regional Cooperative, 25 W. Saddlehorn Road, Sedona, AZ 86351, Attn: Dale De Vries.

The family of Judith M. Bender-Ream created this Life Tributes page to make it easy to share your memories.

Send flowers to the Bender-Ream family.